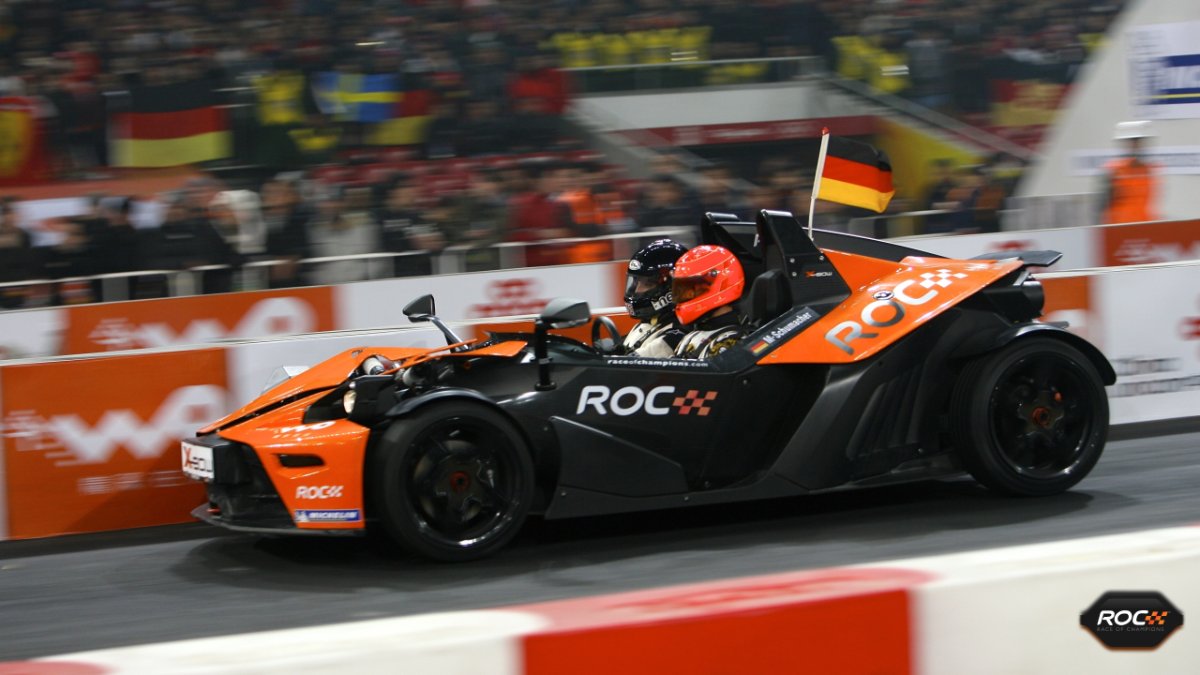 As our tires caught air at the track crossover, I glanced over at Michael Schumacher’s hands and marveled at the way he danced our KTM X-Bow around the corners. We were really moving. The barriers streamed by just inches away, and the turbocharger whooshed furiously behind our ears. I struggled mightily to keep my helmet from smacking the carbon-fiber backrest like a bobble-head doll. In the middle of it all, one thought kept galloping around my head: HOW AWESOME IS THIS??!!

So just how did I end up racing alongside seven-time Formula One World Champion Michael Schumacher in the finals of the Race of Champions?

Rewinding 72 hours found me in another fast seat, this time crammed in economy-class en route to the Bird’s Nest stadium in Beijing, where the 2009 Race of Champions (ROC) was being held. My friend Jim Hancock, who leads Team USA each year at ROC, had generously invited me along. Unique in the world of motorsports, ROC pairs drivers in head-to-head eliminations, usually with a passenger riding along. Accordingly, I packed my race helmet—black with chromed-out “metacool” and “IDEO” livery—in the off chance that I might co-pilot a star driver (David Coulthard? Andy Priaulx? Tom Kristensen?). The stuff boyhood dreams are made of, and I was going to be prepared.

With a dash of serendipity, a lot of luck, and a little persistence on my part, two days later I found myself strapped in alongside Michael in the final heat of the Race of Champions. During our race I was witness to one of the best drivers in history practicing his craft. As an experience, the best I can describe it is akin to being inside Wynton Marsalis’s trumpet during a Lincoln Center gig, or sitting atop Roger Federer’s racquet at Wimbeldon. A study of genius in action from the front row. 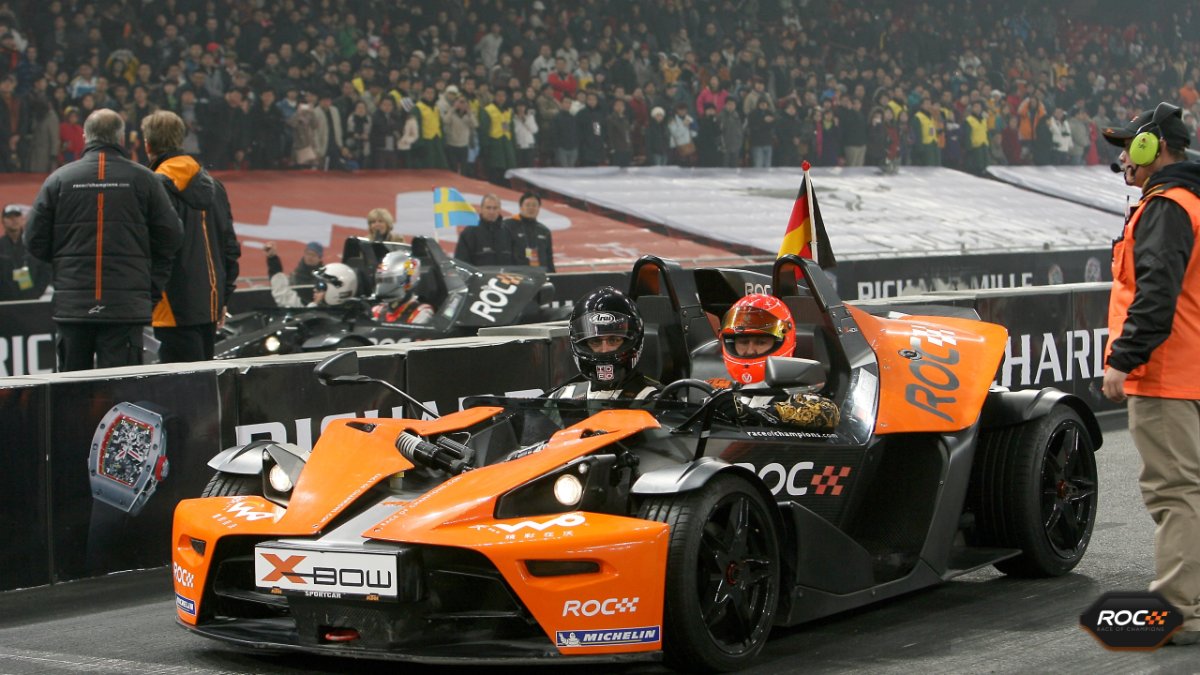 I can still recall every second of it. I literally felt the result of Michael’s endless hours of learning and practice. He possessed an almost supernatural ability to apply a minimum of control inputs to help the car run free and fast. I also saw the power of his total focus and relentless attention to detail: for those few minutes, everything concerned with winning mattered a whole lot, and everything else, not so much. In this video (our race starts around the 2:56:00 mark) you can see him ask the mechanic to check out our opponent’s ride, presumably to make sure that things were fair. On the way out to the racetrack he did a series of huge burnouts to make the rear tires stick better, and during the competition saved tenths of seconds by pounding the apexes with the X-Bow’s front wheels.

We lost. The wildly talented Mattias Ekström came in first. My abiding memory is from our cooldown lap, when Schumacher turned to me with a twinkle in his eye and shared a laugh at the site of Ekström doing a particularly gnarly smoky victory burnout.

Ironically, in our defeat came the most profound lesson I took from my race with Michael. As history shows, he’s a guy who liked to win. But across the 22 or so drivers in a F1 race, only one can stand atop the podium, so even the very best lose a lot of the time. Michael “only” won 29.6% of the F1 races he entered; in baseball terms he batted about three hundred. Not bad, but he certainly had plenty of time to think about how to be on top the next time. So like any great racer, he understands deeply how to be strong in the face of failure.

At the moment we came in second, all the hysterical screams reverberating across the Bird’s Nest abruptly went quiet (most of the Chinese spectators had come to see Michael win). Bummer. But he immediately leapt out of the car and went over to bear hug Ekström. In private, Michael must have been disappointed to lose, but he kept his head up and smiled, positively exothermic in his release of infectious energy. It was truly inspiring; his actions changed the tone in the entire stadium.

A life well-lived can look a lot like that scene from the Bird’s Nest. Whether we’re a child or in our later years, on any given day we all encounter setbacks. We all have personal trials and tribulations we have to work through. Everyone. What’s essential is to be able to resurface, take a breath, and summon the energy to keep on fighting the good fight. And if you can manage a smile along the way, even in the face of adversity, that positive energy might make it all a bit easier. Who knows, it could even help someone else make headway in their own fight.